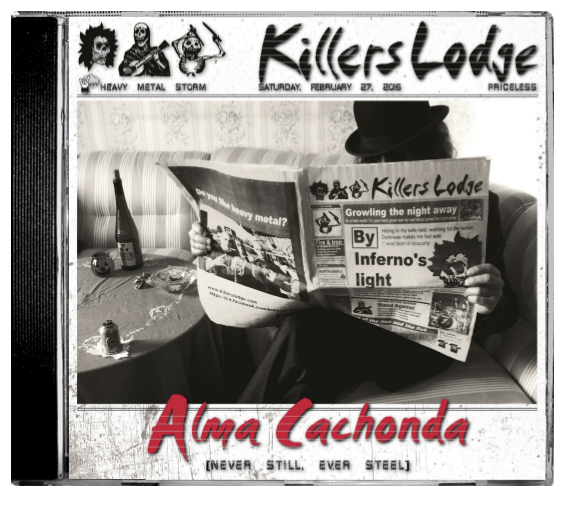 Still in doubt about our debut album “Unnecessary I”?

Here we go with some review to dispel everyone’s doubts:

” ‘Unnecessary I’ is everything but useless” – Chiara Daino for Liveus

“Killers Lodge hit the mark! It’s always a pleasure to listen to pure metal that remind us our roots and make us hit the head back and forth while partying” – Heavy Metal Webzine

“With this first album, Killers Lodge has proven us that it is still possible to make good music while retaining an old-fashioned style as it used to be in the 80s ” – French Metal

“There are a handful of bands that go against the power metal grain. Killers Lodge is one such band” – Full Metal Attorney

“Their debut full-length, Unnecessary I, is the sort of album that you just put on and bang your head” – The Metal Crypt

“If you love music without beating about the bush and without making a fuss over nothing, a music that goes straight to the point and that kicks your ass, play safe and get their album. It’s really worthwhile.” – Heavy Worlds

“Absolutely get this album and as soon as you can go see them live because they sure will do the job!” – Suoni Distorti Magazine

“This is a must own record!! Fans of big and classic heavy rock sound do yourself a favor and check out Unnecessary I” – Heavy Paradise

“The power-trio doesn’t restrict itself to propose again the eighties heavy metal, instead they modernize it, removing the decadent feature and keeping the charm unchanged” – Sorelle di Sangue

“A new proposal to be considered and lend a ear” – Oxido

“Tracks like “New Life”, “Like a Rock”, “Bow and Scrape”, and the wickedly upbeat “The Glory and the Pillory” are definite highlights that display the trio’s knack for writing punchy, vibrant riffs” – Metal-Rules

“This is an album to be listened to free the mind, to give vent to daily frustrations, a down market musical therapy with immediate effect against abuse of power, orthodoxy, uniformity and rules” – Metallized

“A fast paced tome of old school grooves, thundering beats and in your face, direct balls to the walls thrashing!” – Destructive Music

“In their debut album KILLERS LODGE have a raw, almost live sound and they combine quite successfully in their sound the grooves of BLACK SABBATH, the roughness of the early N.W.O.B.H.M. sound, the rock ‘n’ roll attitude of MOTORHEAD and the melodic speed attitude of bands like RUNNING WILD and RIOT” – Behind the Veil

“A straightforward, immediate, direct and even a bit insolent album” – Stereo Invaders

“The excellent production gives the album a fresh and present sound, keeping a live atmosphere at the same time” – Metalitalia

” ‘Unnecessary I’ is a caterpillar that in its solemn pace cynically crushes anything on its drive. This, sirs, is metal in liquid state” – Rockit

“This is a solid debut from a band that knows how to deliver the goods. Fans of big and beefy heavy rock will be pleased” – Sea of Tranquillity

“It’s a timeless work, with an undeniable old school taste, but at the same time with a contemporary freshness” – Spectrum C.R.

“Freshness in composition, instrumental skill and wisdom in knowing how to manipulate the matter of rock’n’roll turning out original” – Iyezine

“Carefree but not vulgar, adrenalin flowing but balanced with tempting melodies” – Metal Head

“With these preconditions, the songs will be crushing in live concerts” – Italia Di Metallo

“Music to mosh, to headbang and to scream together” – The Murder Inn

“The energy and the rage is here, and that is what makes Killers Lodge so great” – Two Guys Metal Review

“Thrash oriented European metal that shrugs off the past, looks to the future, and gives you music that way it was meant to sound… rustic!” – We Love Metal

“The band are very far from copycats, they managed to forge a sound of their own while mixing in classic influences – Almost perfect!” – Metal Temple

One thought on ““Unnecessary I” reviews”